Why Investors Should Be Cheering the Jobs Report

Just over an hour after he sent the above tweet, the Bureau of Labor Statistics (BLS) released great numbers.

The jobs report is great news for all the Average Joes out there… and for investors, too.

Manufacturing Jobs Are Coming Back

According to most economists, when the unemployment rate falls below 4%, the U.S. is at full employment.

Not only are more jobs coming, they’re higher-paying as well.

But now these jobs are coming back. As you can see in the chart below, they’ve been increasing over the past 18 months. 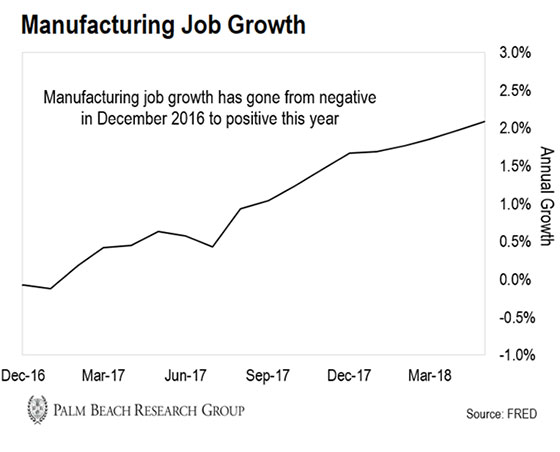 During my Rust Belt Tour last June, I told said that U.S. manufacturing was making a comeback. And now we have proof…

The last time manufacturing jobs grew this fast was in 1995—and a massive six-year bull run in the market followed.

Good manufacturing jobs aren’t the only ones paying more. Businesses across the country are competing for talent. That means they have to pay up to get it.

I’ve heard rumors that sandwich chain Jimmy John’s is offering signing bonuses to new employees. Walmart just increased its base salary to $11 per hour. Not to be outdone, Costco increased its minimum pay to $14 per hour.

(A couple of weeks ago, I golfed with a man who had just retired from Costco. He was a general manager for 30 years. You wouldn’t believe how much he claimed to have made for meeting all his sales and profitability targets. Today, he’s 58, retired, and living his dream.)

In fact, according to the BLS, U.S. workers are getting paid $376 billion more than last year.

With wages growing and more people working, there will be more money sloshing around the economy.

That’s why we’re comfortable owning stocks today. The economy is showing no signs of a recession.

If you’re one of those people on the sidelines, it’s still not too late to buy stocks. You can use the recent pullback in the S&P 500 index to initiate a position.

If you want broad exposure, consider the SPDR S&P 500 ETF (SPY). But if you’re worried about a trade war impacting international businesses, you can follow our advice and buy the small-cap iShares Russell 2000 ETF (IWM).

The businesses held in IWM generate most of their sales in the U.S., and will benefit the most from our bustling economy—with or without a trade war.